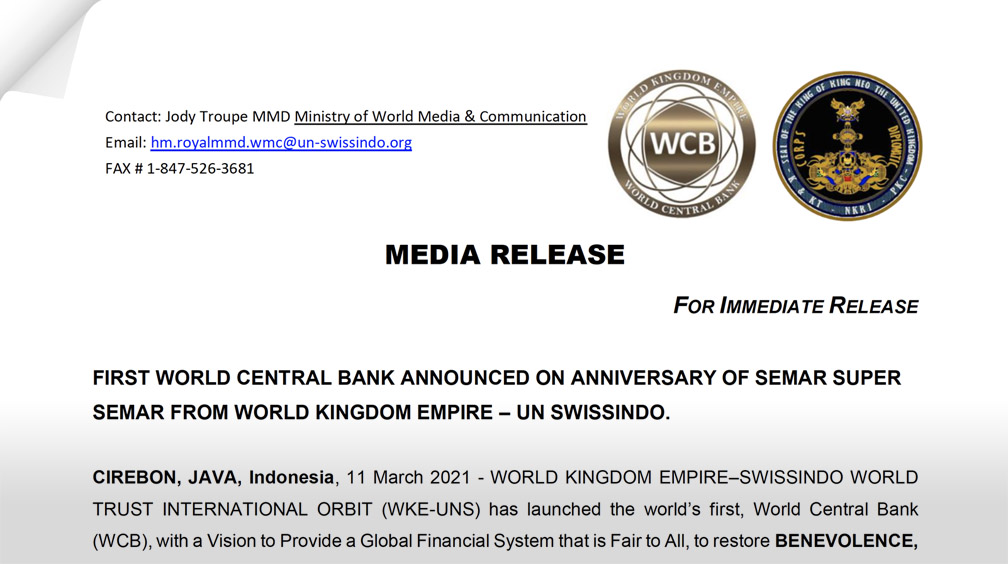 CIREBON, JAVA, Indonesia, 11 March 2021 – WORLD KINGDOM EMPIRE–SWISSINDO WORLD TRUST INTERNATIONAL ORBIT (WKE-UNS) has launched the world’s first, World Central Bank (WCB), with a Vision to Provide a Global Financial System that is Fair to All, to restore BENEVOLENCE, HARMONY, UNITY, INTEGRITY and GLORIFIED PROSPERITY For ALL and a MISSION to realise that VISION and fulfil our profound task of delivering PAYMENT ORDER 1-11 (P1-11) with STATE-OF-THE-ART TECHNOLOGY, coupled with NEW POLICIES reflecting a high degree of INTEGRITY & FAIRNESS.

Since the Semar Super Semar, March 11, 2014, and the Grand Acclamation, October 16, 2016, all the legal facts of the WORLD KINGDOM EMPIRE-SWISSINDO WORLD TRUST INTERNATIONAL ORBIT (WKE-UNS) also known as the UN SWISSINDO and its Payment Order 1-11 (P1-11) Human Obligation Program have become the Public’s Rights, as acclaimed by the Royal K.681, King of Kings, Kholipatul Immam Mahdi, H.M.MR.A1.Sino.AS.S”2”.IR.Soegihartonotonegoro H.W.ST.M1 (Royal K.681 M1), Chairman of WKE-UNS and United Nations Organization Group, Single Owner, Certificate Holder and Owner of the Country NKRI, Transmission Consortium International USA-SWISS and Financiers Consortium International INDONESIA, Investment Club Ownership Position Code A. 045. A. 0001 Basel Tullingen, Switzerland, Parent of the 25 Countries beginning from the origin of NKRI Agreement (CHINA-AMERICA-RUSSIA-ENGLAND-INDONESIA) provisions of the World Lighthouse, part of the return to the Dynasty in the name of the Wealth Treasure of the People in accordance with the SOERAT POESAKA NOESANTARA KEMBALI which was left in the safe keeping of the Kingdoms of Nusantara.

WCB will play a big role in the distribution of Payment Order 1-11 (P1-11) Gift to Humanity, to all beneficiaries worldwide, in all levels, to include Lifetime Basic Income for 7.7 billion individuals, 253 Country and Bank Quotas, and the Venus Project of the future cities for each country as part of the Construction of the Universe.

WCB is taking the World’s Finance and Banking to the next level, a level that has not been reached in the history of mankind. It will be fulfilling the goals of the UNO Group, abolishing poverty, uniting all countries, coming together in world peace, and everyone will be debt FREE.

This is made possible with WKE-UNS and Dewan Ikatan Dokumen International (Board Association of International Document), established by the Founding Fathers in 1887, with its own combined collateral of 78.033.015.393 kgs of Gold and Platinum, EXHIBITS A & B, Confirmation Letter UBS No. UNS-AG/SBG/6118/045/RS.DRS/VII/01, since July 15, 2001, by refinancing the new world economy with the initial amount of 1 Quintillion US dollars, Trusty Prasasty Dynasty, through WCB.

Seven years ago today, MSPTD – Multi Super Power Prasasty Trusty Dynasty Agreement was made in Indonesia, the Semar Super Semar, at the Aston Hotel in Cirebon, Indonesia, between the Royal K.681 M1 of WKE-UNS and the Government of Lao PDR representatives, representing the 253/357 Countries, the World, and was witnessed by WKE-UNS National and International Officers as the representatives of the big five (5) continents, Asia, Africa, Europe, America and Australia.

Semar Super Semar is one of the first International Agreements and Events, uniting all countries, and announcing to the World that UN SWISSINDO Mission is now officially open, National and International for all the people on Earth.

Ani Forest, the World Prime Minister of Finance and Banking for WKE-UNS spoke on behalf of Royal K.681 M1, expressing the mission’s readiness and the need for secure distribution to the people of the world. “WKE-UNS has one Policy, One Personal Only – No Commercial with a mission task of bringing Heaven on Earth. The World Central Bank as a part of WKE-UNS is a bank developed expressly to serve beneficiaries in all levels, from individuals, to corporations and to countries. It brings security for distribution, protection of personal data, and has the means to reach the entire planet.”

A core aspect of the WCB distribution of payments is Know Your Beneficiary, or “KYB” Registration. KYB has a goal to capture, store and maintain crucial data of the global human population – as Beneficiaries of the Payment Order 1-11 (P1-11), safely, securely and reliably.

Ani Forest continued, “To explain further about WKE-UNS Human Obligation Payment (HOP) allowances, each person 17+ years of age will qualify for the HOP’s immediate financial assistance of USD 20,000 each year, on top of their monthly Lifetime Basic Income, and at 21+ years, each can receive USD 400,000 each year in the first 2 years and then USD 30,000 thereafter. The HOP allowance will assist humanity in the transition period going forward, to begin their new life with confidence, once the profound mission of Payment Order 1-11 commences.”

For additional details and understanding, visit the website https://wcbworldcentralbank.org and http://www.wke-uns.info