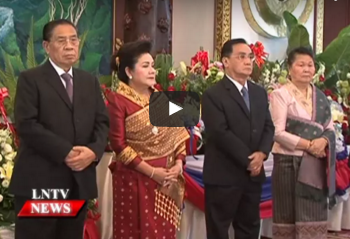 Link to the video: https://www.youtube.com/watch?v=1HutkAhwsU0

INTRO: The numerous events of political and historic importance for Laos in 2015 were the result of the country’s active engagement in international affairs by pursuing a consistent foreign policy of peace, independence, friendship and cooperation.

STORY: President Choummaly Sayasone made the observation while addressing members of the diplomatic corps and representatives of international organisations on Tuesday morning, the 1st of December. They called on the president to express their cordial friendship and goodwill towards him and other leaders as the country celebrated the 40th anniversary of the founding of the Lao People’s Democratic Republic.

The event gave overseas representatives the chance to offer their best wishes to Lao leaders and to mark National Day.

President Choummaly Sayasone said the year 2015 had been of special significance as economic growth had continued steadily and poverty reduction efforts had been stepped up.

He also highlighted some of the significant achievements of 2015, and Thanks to the strong determination and solid unity of the Lao people nationwide, combined with continued support and cooperation from all friendly countries and international organisations near and far, Laos has been able to attain significant progress in its development efforts.

This comes despite the recent global economic and financial crisis and the effects of climate change, which have, to some extent, affected the implementation of the national socio-economic development plan.

Malaysian Ambassador to Laos Dato Than Tai Hing, who is also Dean of the Diplomatic Corps, represented diplomats and international organisations accredited to Laos with a speech to mark the occasion. He congratulated Laos on the remarkable progress made in 2015.

Dato Than Tai Hing said as evidenced by the experience of neighboring countries, it will further integrate Laos with the rest of the world by promoting transparency in trade and investment and eventually strengthening the competitiveness of its industries.

Since the Pathet Lao came to power 40 years ago, there has been significant progress towards political and social security plus socio-economic development, particularly in recent times. The country has made significant progress in the 38 years since its liberation in 1975, but will need to work hard to move off the UN’s list of Least Developed Countries by 2020.

On December 2, Laos celebrated 40 years of independence. Between 1975 and today, the Lao People’s Revolutionary Party has been building the country’s future by protecting national security and encouraging development. December 2 is also a day for celebrating the country’s thousands of years of fighting for its sovereignty. It is a chance to celebrate the freedom of the Lao people and that they now truly own their country.